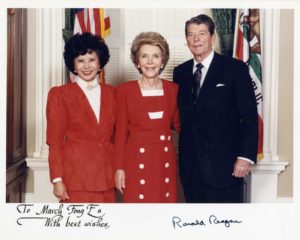 SAN FRANCISCO California political trailblazer March Fong Eu, who served as the state’s first female secretary of state and later a U.S. ambassador to Micronesia, died at the age of 95. Eu served four terms as a Democratic state assemblywoman representing the Oakland area before becoming California’s chief elections officer in 1975. She held that position until 1994 when President Bill Clinton named her ambassador to the Pacific nation of Micronesia.

“Marian Bergeson, a longtime education advocate who served Orange County for decades as one of its most prominent politicians and became a trailblazer as the first woman to win seats in both the state Assembly and Senate, died at 90.

Throughout California, Bergeson was known as a trailblazer for female politicians, initiating a wave of women successfully running for public office. Today, nearly four decades after she was first elected to the state Assembly, three of the county’s seven congressional delegates are female, as are two of its five state senators and two of its five county supervisors.”

“State Sen. Sharon Runner, a longtime legislator who championed a sweeping law that targeted sex offenders and then battled back into political life after failing health, died at 62.

The Runners were instrumental in the drafting and passage of “Jessica’s Law” in 2006, a ballot measure that required sex offenders to be monitored with GPS devices and placed rules on how close they could live to schools and parks where children gather.”

“Former North Coast state Sen. Pat Wiggins died early Thursday after a long illness, and tributes poured in from friends and public officials for the Democrat who overcame a hearing disability during a 14-year career in politics…

Endowed with a keen mind, an engaging nature and a commitment to her principles, Wiggins entered public office in the mid-1990s and became a leader of the local Democratic Party’s liberal faction…

State Sen. Noreen Evans of Santa Rosa, who succeeded Wiggins in both the Assembly and Senate, adjourned the Senate floor session in Wiggins’ memory. “She was not only my former colleague on the Santa Rosa City Council, she was my friend and my hero and really my older sister because everywhere Pat went, I seemed to follow,” Evans said on the Senate floor.”

She was considered a force in Republican politics and carried a proven record as an advocate for taxpayers and businesses. Each year that she served in the state Assembly, Alby was named “Tax Fighter of the Year” by the National Taxpayer Limitation Committee…

In 1993, she was elected to the California Legislature, representing the Sacramento area. In office, she would author California’s Megan’s Law, as well as the landmark legislation that allows police to make arrests for probable cause in domestic violence.”
Source: “Former Assemblywoman Barbara Alby Dies At 66” on CBS Sacramento (11/9/2012)

A cardboard elephant in Cathie Wright’s Sacramento office during her 20 years in the Assembly and state Senate from 1980 to 2000 summed up the Simi Valley Republican’s sense of statecraft: “It’s Better to Be a Stomper, Than a Stompee.”

“I’m tenacious, I’m irascible, I’m a fighter,” Wright, then the only woman among 15 Republicans in the state Senate, told The Times in 1999. “You have to be tough in this business; you can’t just sit back and let them roll over you.”

A right-wing Republican who favored a ban on abortions and despised gun control, Wright was known as a hard-working and incisive lawmaker.

“Teresa Hughes, a former Democratic state senator and assemblywoman from the Los Angeles area who was best known for her focus on education during her 25 years in the California Legislature, has died. She was 80…

In 1983, she was chairwoman of the Assembly Education Committee when she co-wrote an education bill that set state graduation standards, lengthened the school day and year, raised teacher salaries and standards, and required prospective teachers to pass a basic skills test…

There were 15 women state lawmakers in 1985 when the Joint Rules Committee formally recognized the new bipartisan Caucus of Women Legislators. Hughes, who was the senior woman in the Legislature at the time, was selected to chair the caucus.”

“State Sen. Jenny Oropeza was known for her drive and dedication to public service. The Long Beach Democrat had a slow but steady rise through politics over practically her entire life. While attending Cal State Long Beach, she was twice elected student body president. In her 20s, she was the first Latina appointed to the California State University board.

State and local officials said they were shocked by Oropeza’s death, describing her as “tenacious,” “caring” and a “trailblazer.”

Assemblyman Tony Mendoza, D-Norwalk, who was a Cal State Long Beach student in 1994 when he was an intern working on Oropeza’s school board campaign, also said Oropeza was a mentor who supported his runs for the Artesia City Council and state Assembly. “Jenny taught me what it takes to become a legislator,” he said. “The California State Legislature will never be the same without her.”